Essential protection against hackers and malware 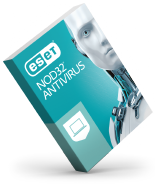 Protects you against all types of malware, including viruses, ransomware, rootkits, worms and spyware.

Enjoy the full power of your computer. Play, work and browse the internet without slowdowns.

No system updates or annoying pop-ups while you play games or run a program in full-screen mode.

Making the internet a safer place

Independent evaluators put ESET among the best in the industry, shown also by the record number of Virus Bulletin’s VB100 awards.

Made in European Union

ESET values, like integrity, reliability and independence, all stem from our European roots and are safeguarded by our private ownership structure.

Artificial intelligence, machine learning and a cloud-based reputation system are just some of the cutting-edge tools developed in our 13 R&D centers.

We have been protecting you for 30 years on five continents. Our 22 worldwide offices serve 110 million users who trust our experience and reputatation.

Protect yourself from ransomware and other types of malware with ESET's time-proven multilayered protection, trusted by over 110 million users worldwide.

Antivirus and Antispyware
Provide proactive protection against all types of digital threats, including viruses, rootkits, worms and spyware.

Anti-Phishing
Protects your privacy and assets against attempts by fake websites to acquire sensitive information such as usernames, passwords or banking details.

Scan While Downloading Files
Decreases scanning time by scanning specific file types − such as archives − during the download process.

Ransomware Shield
Blocks malware that tries to lock you out of your personal data and then asks you to pay a ‘ransom’ to unlock it.

UEFI Scanner
Protects from threats that attack your computer on a deeper level, even before the start of Windows - on systems with the UEFI system interface.

Cloud-Powered Scanning
Speeds up scans by whitelisting safe files based on the ESET Live Grid® file reputation database. Helps to proactively stop unknown malware based on its behavior, by comparing it with our cloud-based reputation system.

Idle-State Scanning
Aids system performance by performing in-depth scans when your computer is not in use. Helps detect potential inactive threats before they can cause damage.

Host-Based Intrusion Prevention System (HIPS)
Lets you customize the behavior of the system in greater detail. Gives you the option to specify rules for system registry, active processes and programs to fine-tune your security posture.

Play, work and browse the internet without slowdowns. Stay unplugged and online longer with battery-saving mode, and enjoy gaming without distracting pop-ups.

Portable Computer Support
Postpones all non-actionable pop-up windows, updates and system-hungry activities to preserve system resources so that you can stay online and unplugged longer.

Gamer Mode
ESET Smart Security Premium automatically switches to silent mode if any program is run in full-screen. System updates and notifications are postponed to save resources for gaming, video, photos or presentations.

Easy to install, renew and upgrade, our security is also designed for simple set up of all routine tasks. If you want, fine-tune your profile with 150 detailed settings.

One-Click Solution
Lets you view your protection status and access the most frequently used tools from all screens Offers comprehensive, one-click solutions to potential issues

Settings for Advanced Users
Offers in-depth security settings to fit your needs Allows you to define maximum scanning depth, scanning time, size of the scanned files and archives, and much more

Smooth Product Upgrades
Benefit from new protection technologies as soon as they become available, for a continuously high level of security

I have tested many products in the past and nothing comes close to ESET in terms of protection, low system footprint, consistency and reliability.

We value your loyalty

That is why we made your license renewal process easy and fast. And as a bonus, you get 30% OFF if you renew now!

All ESET products come with free technical support. Our support teams are spread locally and speak your language.